Study for Struggle: The Tragedy of Heterosexuality

When I was twenty, I spent the summer vo 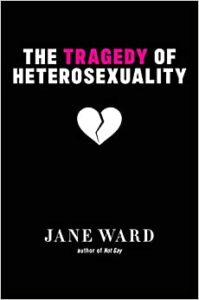 raciously reading queer theory books recommended by knowledgeable friends. These books profoundly impacted me as a cisgender man who ambivalently identified as straight; they helped me reflect more deeply on my own sexuality and intimate relationships. Ever since, queer activism, sociality, and thinking has been a touchstone for me. Jane Ward’s book The Tragedy of Heterosexuality, published last year by NYU Press, generously offers the insights of queer liberation movements and theorizing to all of us. Ward examines heterosexuality – what Adrienne Rich called “compulsory heterosexuality” and what Gary Kinsman calls “heterosexual hegemony” – as a structure and culture that requires tremendous work, violence, and heartbreak to sustain. She traces the history of “self-help” resources aimed at straight people (what she evocatively describes as the “heterosexual repair industry”), offers an ethnography of so-called “pick-up artists” and the men who attend workshops to emulate them, and highlights contemporary queer observations of straight culture. I especially appreciate Ward’s concept of “the misogyny paradox” at the heart of hetero-patriarchy: “the cultural expectation that men should like women, even as they are socialized into a culture that normalizes men’s hatred of women.” Throughout the book, she also brings contagious confidence that things can be much better than they are, including for straight men and the people who love them. It’s really wonderful, almost 23 years after my first deep dive into queer theory, to be reminded again how revelatory and liberating these insights are!

Here’s one gem from Ward:

Marriage experts recognized men’s disinterest and violence toward women, and women’s resentment and fear of men, as fundamental obstacles for straight relationships, and, consequently, they produced an industry designed to train men and women to like each other. But they were also committed to doing so without undermining men’s authority or challenging the basic logic of the gender binary. These rehabilitative projects constitute the modern heterosexual repair industry, an industry that capitalized on the difficult and unfinished transition from heterosexual coupling as a patriarchal contract to straightness as a relationship, and an identity, anchored in opposite-sex desire.